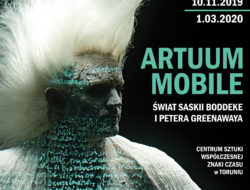 A review of films about art accompanying the EnergaCamerimage...

A review of films accompanying the exhibition „Artuum Mobile: The World of Saskia Boddeke & Peter Greenaway”

In the 1970s, Peter Greenaway rose to fame as the author of short- and medium-length conceptual films which combined a formal experiment with a documentary style and an absurd plot. The crowning moment of that period was the three-hour-long film The Falls, which won the prestigious British Film Institute Award. This artistic success enabled Greenaway to create his first feature film.

The events of The Draughtsman’s Contract take place in late 17th century England. The protagonist is Neville, a talented artist commissioned to create 12 sketches of a manor and its surrounding gardens. His contract also requires him to have sexual relations with the wife of the manor’s absent owner. The sketches drawn by Neville suggest that the owner had been murdered, which causes a great disquiet among the company staying on the estate. Eventually, they devise a plot against the arrogant artist.

The Draughtsman’s Contract is a mise en abyme film, exploring the possibility of experiencing reality through art. The eponymous draughtsman employs special optical tools to create perfect compositions which capture the landscape with astounding precision, but he has no real power over his environment. His endeavours are repeatedly interrupted by events beyond his control.

The film combines elements of high art, such as references to Baroque painting or the music of Henry Purcell, with genres belonging to popular culture, such as mystery fiction. Both the plot and the form of the film seem to celebrate artificiality. Almost all the shots are static, with long shots significantly outnumbering close-ups. Cinematography emphasises the vividness of the frames. The language used by the characters is also unnatural, full of elaborate wordplays and literary affectation. The costumes, hairdos, and gestures are ostentatiously extravagant. This is a world in which survival depends on one’s ability to keep up appearances.

This film is the result of the first collaboration between Greenaway and prominent cinematographer Sacha Vierny, who has since greatly contributed to the visual side of the British director’s work.

The plot revolves around twin brothers who lose their wives in a car accident. Fascinated by death, they begin to study Darwin’s theory of evolution, and document the decomposition of dead bodies. They also both begin an affair with a woman who survived the crash but lost one of her legs. Most of the action takes place at a zoo, whose director strives to eliminate all of the black and white animals from the exhibits. Another important thread is the story of a surgeon trying to recreate the characters and scenes from Vermeer’s paintings.

The characters get into a number of absurd situations, laced with dark humour. Greenaway uses this as an excuse to delve into a philosophical exploration of the relationship between life and art. Is there any symmetry in this correlation? It is the idea of symmetry, after all, that inspires the protagonists in their research of nature and culture. Symmetry is also a central concept in the composition of shots in the film. The theme of a mirror image manifests itself both in the surgeon’s desire to emulate Vermeer’s art, and in the twins’ growing obsession with the preservation of the species caused by their experiments.

This film was shot in Poland, at the atelier of the Wrocław Feature Film Studio. It is a story based on true events from Rembrandt’s life, depicting the circumstances and consequences of the creation of one of the Dutch master’s most celebrated works – The Night Watch. It proposes a theory, according to which the group portrait of civil guards contains hidden information about a crime resulting from a conspiracy between wealthy merchants from Amsterdam. The artist attempts to expose the crime through his painting, but this decision takes a heavy toll on both his career and his private life.

Greenaway presents Rembrandt not only as a brilliant painter and a watchful, often ironic observer of his times, but also as a director who stages a spectacle in order to create a painting. In a way, he is also a pioneer of film-making, aware of the significance that the dynamics of movement and light bear for the expressiveness of a scene. The impression of theatricality is amplified by the fact that most of the action takes place indoors. Shots styled to resemble Rembrandt’s works seem to be a projection of the painter’s aesthetic sensitivity. In the realm of fiction, where his artistic visions are born, he holds sway over his environment and feels free. The return to reality means the loss of control over his own fate and a relapse into alienation.

The central themes of the film are further explored in the documentary Rembrandt’s J’accuse, in which Greenaway analyses and interprets The Night Watch, encouraging the audience to uncover secrets hidden in famous paintings.

Goltzius and the Pelican Company (2012)

The second part (preceded by Nightwatching) of the planned Dutch Masters trilogy. The film’s protagonist is Henrik Goltzius – a graphic artist and engraver who lived at the turn of the 17th century. Together with a group of colleagues, he enters into an agreement with the margrave of Alsace, a region which was, at that time, famed for its tolerant views. In exchange for funds needed to purchase a printing press and the opportunity to publish an illustrated edition of the Biblical Parables, Goltzius prepares spectacles based on stories from the Old and New Testaments. They depict six sexual taboos that can be found in the Bible. The stagings cause a growing controversy among the dogmatists, who argue about the meaning of certain Biblical scenes. The performers combine their roles with their own personal problems and desires, to the point where it is difficult to determine when they are in character, and when they are expressing their own thoughts. Passions driven by lust prove to be more compelling and compatible with human nature than canonical visions of virtue. The performances create a liberating space for the characters, allowing them to act on their perverted fantasies. This, in turn, elicits a violent reaction from the guardians of morality. However, in the end, they themselves also become part of the iconoclastic spectacles.

All the scenes were shot in a post-industrial hall, which amplifies the impression of theatricality and conventionality of the film’s action. Goltzius himself provides commentary for the events, addressing the audience directly and explaining the historical, theological, philosophical, and artistic contexts of particular situations. The protagonist draws our attention to the process of interpreting text through images, and to the significance of imagery for the understanding of various cultural symbols and metaphors. The essayistic form of the film proves to be a good foundation for this kind of contemplation.

Greenaway employs various techniques to emphasise the artificial quality of his work. The old poetry of “living images” is completely transformed by modern multimedia. An effect used particularly often is the overlapping of several shots. Abstract notions find embodiment in the iconographic spectacles. Erudite ponderings on the impact of illustration on our consciousness are laced with dark humour. The process of translating the language of words into the language of images is hindered not by moral dilemmas, but by the mundane biological and psychological urges of the performers who play the Biblical characters.

A portrait of Sergei Eisenstein, one of the most innovative film-makers in the history of cinema, whose style and artistic ideas have proved to have had a great influence on Peter Greenaway. The plot revolves around the period when Eisenstein stayed in Mexico, working on a film about Mexican culture. He filmed several dozen hours of footage but eventually, the cost of his prolonged work exhausted the picture’s budget. In the end, the project was cancelled, following the intervention of impatient producers and Soviet authorities who wanted the director back in his homeland. The experience proved traumatic for the film-maker who, by that time, had already created such masterpieces as Strike, Battleship Potemkin, and October.

In Greenaway’s film, the subject of freedom is presented in the context of both Eisenstein’s artistic work, and his personal life. During his stay in Mexico, the director meets a local guide and undergoes a sexual initiation. A passionate homoerotic affair with a representative of a different culture helps Eisenstein face his fears concerning death and the passing of time.

However, in a way similar to Greenaway’s other works, the real or hypothetical events from the artist’s life serve only as the background for a cinematic essay on art. The images are often multiplied on the screen, allowing the author to add audio-visual footnotes in the form of iconic scenes from Eisenstein’s films, photographs of other artists he knew, and documents such as notes or sketches. This approach makes the film resemble a lecture on the people and phenomena which shaped the pop culture and the avant-garde movement of the 1920s and ‘30s.

In numerous interviews, Greenaway has stated that cinema was dead, and that the only contribution of film-makers to international art was the montage of films according to the method defined and practised by Sergei Eisenstein. Thus, the British director’s picture can be viewed as a tribute to the artist who had revolutionised the language of cinema. However, it is also Greenaway’s profession of faith in formal experiments in art – the aesthetics of his film combine references to the classic “montage of attractions” with modern optical tricks and the use of colour, animation, and digital effects.

» Cinema, Home » A review of films accompanying the exhibition „Artuum Mobile: The World of Saskia Boddeke &...