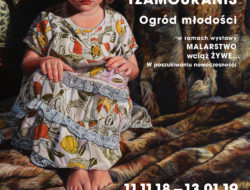 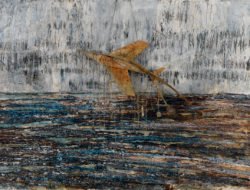 The works by Jakob Mattner are distinguished because of the artist’s wish to find an artistic place for drunk planets in the inconceivable matter of the universe, at the same time creating reflections of human tragedies in them.
Franz Stanislaus Mrkvicka

Jakob Mattner was born in 1946 in Lübeck, and currently lives and creates his art in Berlin. In 1967–1972, Mattner studied sculpture in Hochschule der Künste (Academy of Fine Arts) in Berlin, and then in Italy (DAAD in Rome, Villa Romana in Florence) and in Paris (Cité des Arts). The leading motif of Jakob Mattner’s art is the investigation of darkness, twilight and light. The artist finds various ways to experiment with sculpture, light installations, painting on glass and on paper, as well as collotype.

Light and its flow, intertwining light and darkness, light permeating through glass, reflections in mirrors, avoiding static images and space, dispersing the rays overcoming the gravity of movable, liquid forms – these are the principal means of expression used by Jakob Mattner in his artistic explorations.

In the column hall in the Centre of Contemporary Art in Toruń we will have an opportunity to see two of his monumental spatial installations – Second Planet and Transit, which will be constructed by the artist on the spot, especially for this exhibition, with the use of rear projection screens. The artist claims the column hall at the Centre of Contemporary Art in Toruń is a perfect place to present the ever-changing tension between light, space and the way they are experienced by the audience. In these installations, the source of moving images producing various visual sensations will be a specially constructed apparatus, hidden behind the projection screens. This precisely built construction will be composed of movable discs reflecting the light. Light instrumentation and orchestration will be analogue-managed: it will be taking place in the “NOW”, in an intentional opposition to the two-dimensional digital projection.

“Light spaces” by Jakob Mattner evoke associations with basic categories of visual perception and visual arts. The broad, far-reaching arches of light and structures of beams produce a depth, in which the light seems to be probing the space of the night like an echo. The poetic mood is created by silent fireworks and muted display of mysterious flashes. Mattner’s works attempt to present the invisible…

A specific overture to the installations are two cycles of paintings by Jakob Mattner.

The first cycle is Der ferne Klang (Sounds from afar) – 12 paintings in acrylic and shellac (a type of resin used to make the first gramophone records) on Japanese paper. These paintings “capture the moment”, they are a metaphor of distant sounds, whose vibrations produce waves in the light, because Mattner conceives of light and sound as non-material media capable of describing spatial dimensions.

Helios Negative (Negatives of the sun) – 48 paintings on glass – these works touch upon a taboo subject: the artist makes it possible for the viewers to look at the sun by reversing a negative (and more precisely: painting with light): what was light is now dark and what was very dark is blindingly light: “The spectator is looking at the magic and precision of the image that becomes reality” (Gisela von Wysocki).