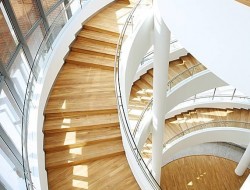 The CoCA’s logo was chosen in an open competition for the visual identification of the CoCA in Torun. The author of the chosen project is Sylwia Giżka.

The idea of the project:

The main typographic form of the sign, the letter T, emphasizes the relation between the CoCA and Torun, the city where it is located. Architectural axis of the sign is made of two rectangles joined at right angle. This hard graphic matter is contrasted by a soft painterly patch. The dynamics is added by a dot which seems to float away. These plastically contrasted elements are also a record or trace of a process which takes place in TIME. The events leave traces which are noticed and preserved. This way they SIGN their time. The sign combines the idea of building/organizing (geometric, architectonic construction of the sign) with the idea of artistic activity which falls outside straight descriptions (non-geometric patch). The dot seems to move away thus suggesting passing; paradoxically it has a function of suspension points, a kind of oblique statement. The sign is to present the institution of the CoCA and its building (with reference to the building’s construction elements) as a basis and starting point for educational and artistic activities. (…) [Sylwia Giżka]

The sign is a modern universal and original project which is fully adequate for the idea of the Centre. Among other suggested systems of visual identification this project offers the biggest possibility of building an interesting image of the national culture institution which is being set up in Torun. The original form of the sign, its clarity and dynamics create, in the jury’s opinion, a possibility of developing a modern identification system in accordance with the Competition Rules.

Sylwia Giżka
The author of the project for the system of visual identification for the Centre of Contemporary Art in Torun. She was born in 1978; she is a graphic designer, a graduate of the Department of Industrial Design at the Academy of Fine Arts in Warsaw (2005). She is an author of texts on design published in Grafia, 2+3D and www.culture.pl. She teaches design, art history and advertising at the Warsaw School of Advertising.