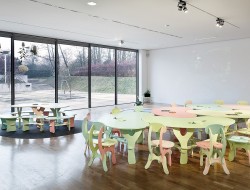 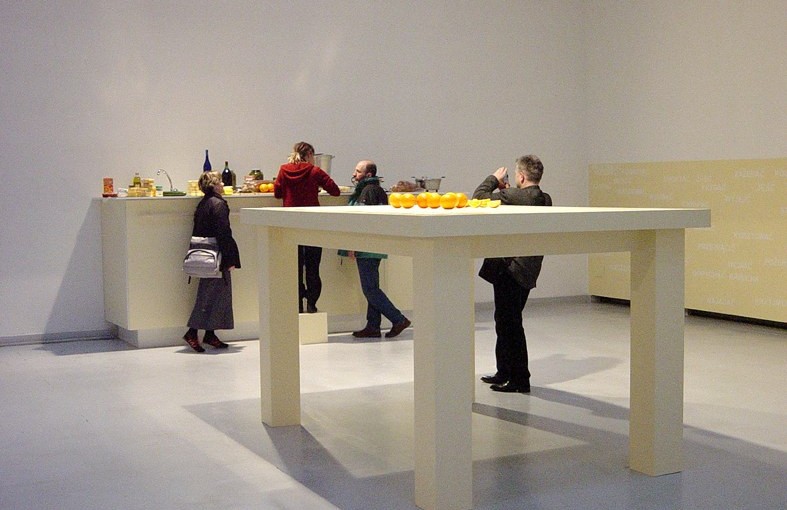 new room at the art centre

On 30th May 2009, a new, multifunctional workshop room dedicated to creative leisure time was opened in the Centre of Contemporary Art in Torun. Unique furniture was designed by Tomek Rygalik.

Located on the ground floor, STUDIO+KITCHEN offers space for discussion meetings, music events and artistic actions. It is also a place for friends to meet for informal chats. The first site-specific space of that type in Poland, it serves as the gallery’s community space
which is, at the same time, a display of contemporary design. Dedicated in its entirety to local community, the room is open to every one. One can come here to read a book, enjoy a cup of coffee or simply chat. Educational facilities for children and the youth are also provided.

The designer has abandoned the straightforwardness of everyday objects, furnishing the room with sculpture-like tables, benches and seats. The arrangement of objects ensures that the room serves its function as a meeting place, while being, at the same time, a site-specific design project. The concept was inspired by the architecture of favelas (widespread shanty towns growing around the cities in Brazil with buildings constructed of the cheapest materials, mostly recovered from other buildings or rubbish dumps) and the idea of creative recycling. With time, the objects are to be moved and reappropriated, they will wear out.

The furniture designed by Tomek Rygalik are made of OSB panels. Raw aesthetics of a building site will give a new aura to the space of the CoCA. The designer says: A project often springs from the idea that something may be used for some other purpose. An open mind is crucial. Industrial appearance and firm texture of OSB counters the minimalist, cold and elegant architecture of the Centre. The project designed by Rygalik is based on simple, functional and utilitarian design. The Room has an auditorium and moveable performance space which may serve as a DJ console or sitting area if necessary, with various sofas, tables and stools, as well as the children area. Natural plants are an important factor facilitating relaxation. There is a reference library in STUDIO+KITCHEN, as well as a place for playing games.

The room also has a KITCHEN made by Elżbieta Jabłońska, available to guests during various events taking place here. The work from the CoCA collection displayed in the new space is both functional and integration-stimulating, softening the sterile architecture of the gallery and creating an aura encouraging free exchange of ideas.

Tomek Rygalik was born in Łódź in 1976. When he was a child, he used to watch his father constructing everyday objects hardly available at that time, such as, for example, a bedside lamp or a lawn mower. That was where he first encountered design. He studied architecture and urbanism at the Technical University in Łódź as well as industrial design at the Pratt Institute in NewYork. On leaving the institute, he worked for many design companies in New York. He was a consultant for such brands as Kodak, Polaroid, MTV, Uniliver or DuPont. In 2003 he took up post-graduate studies at the Royal College of Art in London where, upon graduating, he became a research associate. He runs his own design studio in London and in Łódź. He collaborates with Moroso, Artek, Iker, Noti, Heal’s, ABR. and Ideal Standard amongst others. He heads a design studio PG13 at the Academy of Fine Arts in Warsaw. For Tomek Rygalik’s projects, as well as for those designed by his students, resourcefulness is a trademark. He claims resourcefulness is an important trait of Polish design acquired in the days of neediness. His works were displayed at numerous exhibitions, including Berlin, London, Milan, Munich, New York, Tokyo and Valencia. He received several awards in design, including Rosenthal Design Award (2004), BSI Enviromental Design Award (2005), British Council Design Award (two projects – 2005). He was the winner, together with Dutch designer Jorre van Astem, of the British edition of Bombay Sapphire Martini Glass Competition 2005.

Elżbieta Jabłońska was born in 1970. Since 1996, she has worked as an assistant at the Drawing Department of the Nicolaus Copernicus University in Torun. She received the award „Spojrzenia 2003” given by Fundacja Kultury Deutsche Bank in 2003. The artist deals with painting, drawing, graphic art., photography, installation and performance art. Elżbieta Jabłońska’s works, often described by critics as post-feminist, are kind-hearted ironic comments on the status and role of women in a traditional society. The artist used and transforms cultural stereotypes as well as clichés concerning females and feminity, approaching them with intelligence, humour and warmth.

Jakub Stępień ‚Hakobo’ is one of the leading Polish creators (born 1976). He was the only Pole to be featured in the prestigious American compendium New Masters of Poster Design, John Foster, Rockport Publishing – a publication showing 50 best graphic designers and poster artists worldwide. Hakobo was also recognized by the Dutch publishing house Items which dedicated an article to him presenting his works. The Paris-based agency Young & Rubicam invited him to design the French campaign for Wyborowa (2004/2005), including hoardings and a limited series of bottles. A year ago, the artist was featured on the cover of the only designer magazine in Poland 2+3D, with a comprehensive presentation of his achievements inside. With his unconventional graphic actions, Haboko reaches realms where art was not present before. He designs clothes, textiles, skateboards, badges, stickers, gadgets, newspapers, books and posters.